The original post of what I am posting below is found at Life After Ministry.

1 John 2:9 “He that saith he is in the light, and hateth his brother, is in darkness even until now.” 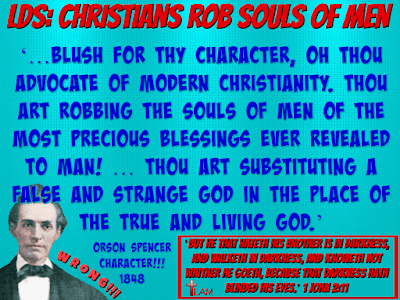 While we’re not immune to coming across anti-Christian literature in Mormon propaganda, it was surprising to see an entire booklet dedicated to defaming Christianity. The booklet was written and printed for members living in Great Britain just four years after Joe, and Hyrum Smith were killed in Nauvoo, IL. Because of its sheer length, we’ve pulled a few quotes for examples. To read their entire circular, see link provided below.

Sadly, the Church’s attitude towards Christianity hasn’t changed. Proof  of this is seen in their canon — 1 Nephi 14:10.

It’s important for Christians to remember when witnessing to Mormons there’s not any one thing that’ll change their minds. This is done through the supernatural work of God’s Holy Spirit! Our job is to plant seeds of truth by explaining the identity of the real Jesus of the Bible.

We’ve posted our findings today to provide insight on what Mormons really think of people who aren’t LDS.

Although it’s not new to me personally, it’ll always be heartbreaking to know this is how I used to think each day when I was LDS.

Pray for those who feel trapped to ask the Lord for courage to leave!

With Love in Christ;

LDS More Faithful Than Any Other People

[p.2] … Before men can successfully traduce and impeach the character of the Latter-day Saints, they have to demolish the only bible standard of character.

It strips the bible of all that makes it savory to the souls of men, for this world and the next. Many of the abettors of Christianity do this…

The friends of modern Christianity are the last people that should talk against the character of the Latter-day Saints; but still they talk the most, and are the most virulent opposers. …

[p.3] … Blush for thy character, oh thou advocate of modern Christianity. Thou art robbing the souls of men of the most precious blessings ever revealed to man!

… Thou art substituting a false and strange God in the place of the true and living God. …

Millions Have Perished In 17 Centuries Of Darkness

Thou hast so mutilated and garbled the ancient gospel, for more than seventeen hundred years, and darkened the pathway to heaven, by commentaries and the precepts of men, that many generations have lived and perished under thy deceivings without God in the world. …

[p.4]The character of modern Christianity is abominable everywhere. The very heathens are ashamed of her vices, and dread to come in contact with her polluted breath…When a few more of the servants of God have sealed their testimony with their blood, the shame of her nakedness will not only be made manifest, but she will be burned with fire.” — Orson Spencer, 1848

Posted by Glenn E. Chatfield at 4:56 PM No comments:

Email ThisBlogThis!Share to TwitterShare to FacebookShare to Pinterest
Labels: Attacking Christianity
Newer Posts Older Posts Home
Subscribe to: Posts (Atom)
This blog's title is based on the name LDS members call those who expose them as being a non-Christian cult.